HID vs. LED vs. Halogen Headlights: Which is Best for your Car?

If you find difficulty in differentiating between HID vs. LED vs. Halogens headlights, fret not!

There are headlights galore in the market but no legit information to cater to the riders.

Therefore, in this article, I’ll highlight some significant differences between HID vs. LED vs. Halogen bulbs. Also, I’ll specify which one is the best for your car.

Let’s light up your way! 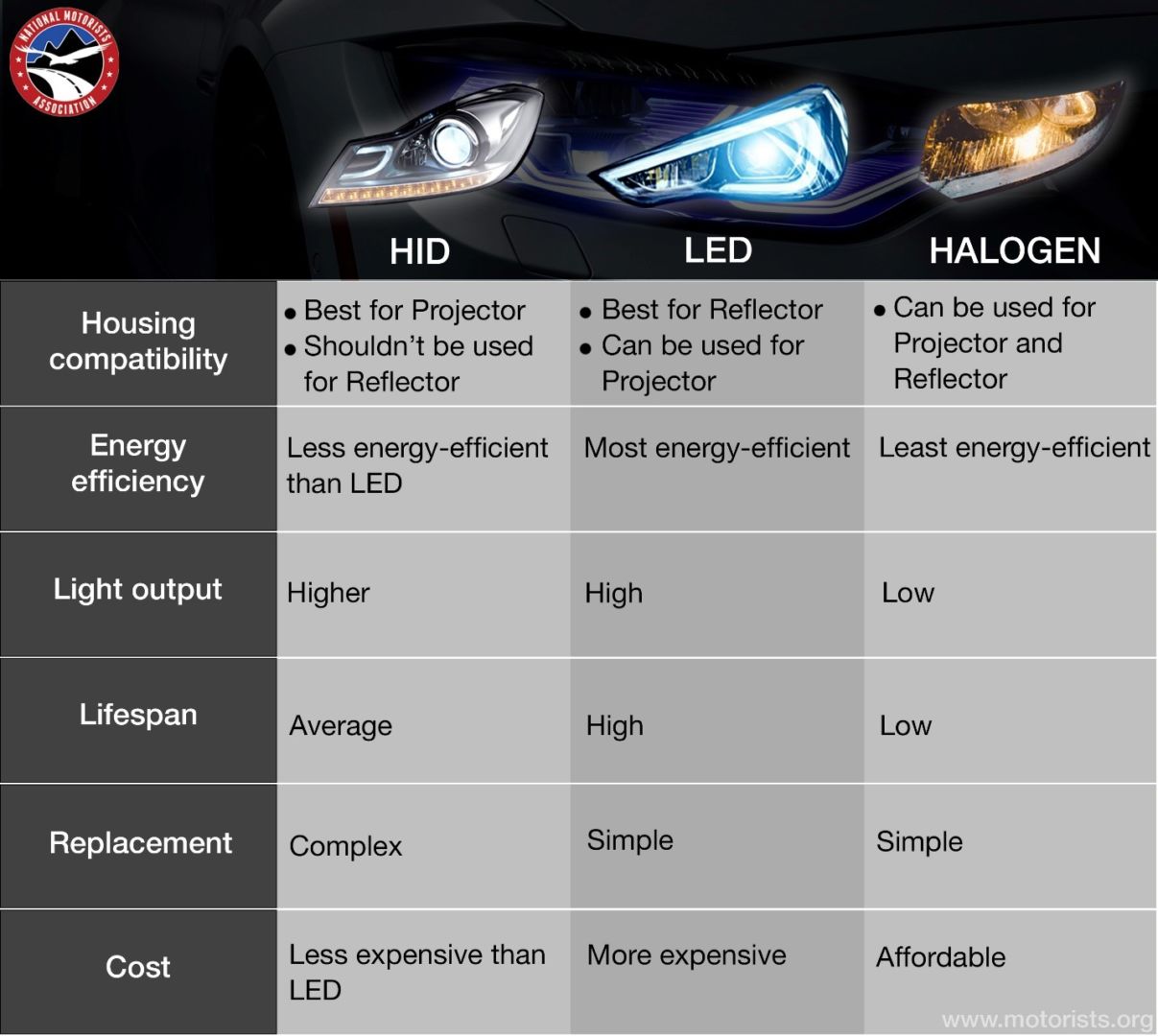 These are some main differences between HID vs. LED vs. Halogen headlights.

Housing Compatibility
The most notable difference between the three headlights, HID vs. LED vs. Halogen, is their housing compatibility.

No type fits all of the headlights. However, most vehicles feature halogens and their reflective housings as the standard headlight.

Therefore, when it comes to halogens, they can be used for both projector and reflector housings.

Meanwhile, LEDs are an ideal choice for reflectors and sometimes for projectors as well.

However, HIDs are strictly for projectors because they are too bright for reflector headlights, ultimately blinding the drivers.

Energy Efficiency
An energy-efficient bulb converts all electricity to light energy without producing any heat at all.

When choosing our automotive accessories, we should always strive for the most energy-efficient options.

Halogens are the least energy-efficient bulbs that take up to 56.7 watts.

Halogens are followed by HIDs that consume around 49.1 watts, making it the second least efficient bulb in the headlight hall of fame.

The most effective option on our list is the LEDs that take up to 32.9 watts, thereby winning the crown in terms of energy efficiency.

Light Output
The major difference that sets the three bulbs HID vs. LED vs. Halogen apart is the light output.

The light output or brightness of headlights appeal the most to car enthusiasts because it’s the only factor that affects your ride.

Halogens, in most cases, emit approximately 700 lumens in low beam and around 1200 lumens in high beam.

However, in some cases, the halogen bulbs produce around 1,600 to 1,700 lumens, provided that they are designed for high-beam only. Moreover, the overall light output of halogens depends on the brand and model of headlights.

On the flip side, HIDs are popular among car owners for their extraordinary performance. HIDs consume less power and produce maximum results than halogen bulbs. On average, the HID emits around 3000 lumens, making it three times brighter than the Halogens.

In conclusion, the light output of Halogen bulbs is the lowest compared to LEDs and HIDs. Meanwhile, HIDs are the brightest, and LEDs come in second.

Lifespan
The overall lifespan of LED vs. HID vs. Halogen makes the biggest difference.

Halogen headlights are cheaper and easily accessible, but they have a short lifespan compared to HIDs and LEDs. Halogens promise 450 – 1000 hours of use. Also, they drain your car battery by consuming a lot of energy.

As far as HIDs are concerned, they have an average lifespan greater than halogen bulbs and LEDs. HIDs promise 2000 – 8000 hours of use.

The advantage of LEDs over any other bulb is the superior lifespan and phenomenal performance. The average duration of LED light bulbs is around 30,000 – 50,000 hours that depends on various factors.

Ideally, LED bulbs last up to 10 years or even longer, depending on their use and conditions.

Replacement
The ease of replacement is what matters the most while choosing automotive parts.

As halogen bulbs are more common among drivers, the replacement is easy as a breeze.

The same is the case with LEDs. They are easy to replace, emit a brighter and crispier light with less energy consumption.

Alternatively, the replacement of HIDs is much more complex than halogens and LEDs.

Cost
Halogen replacement bulbs are the most affordable option on my list, ranging in brightness from basic to premium options.

Moreover, HID bulbs are more expensive than Halogens and a little cheaper than LEDs.

However, in terms of light output, HID headlights have surpassed both the headlights — LEDs and Halogens with around 3,000 lumens.

High-quality LED headlights are the most expensive, ranging anywhere between $50 – $200. Despite the cost, they last the longest and light up the horizon far and wide.

Hid vs. Led vs. Halogen Headlights: Which One to Pick?

The final decision depends on your preferences. For example, if you’re looking for a cost-effective replacement, Halogens are the most common and convenient to replace without additional parts at an insanely affordable price.

However, the disadvantages of Halogen headlights outweigh its one advantage of being cost-efficient. They use more power with a short lifespan and poor performance.

On the other hand, LEDs and HIDs emit bright and crisp light, representing tailor-made lighting solutions for road illumination. Both LED and HID headlights are visually pleasing and provide better efficiency and cost-effectiveness, provided that they last longer than Halogens. Hence, the cost is justified.

However, most car enthusiasts prefer LED headlights for obvious reasons. LEDs are high-efficient, cool running, and have a long lifespan.

Considering LEDs are solid-state, they can handle vibrations and impacts on the road pretty well. Also, they don’t require a set warmup time to reach their full potential.

Therefore, if you’re a connoisseur driver who spends most of the time on roads, I’d recommend LED headlights.

HIDs, LEDs, and Halogens have their fair share of disadvantages and advantages.

Nonetheless, what sets them apart is energy efficiency, cost, and brightness.

Lastly, you are your own judge. Therefore, choosing the best headlight for your car narrows down to preference and what kind of a driver you are.

Tim Miller is a mechanic and car blogger from Denver, Colorado. He’s the Editor-in-Chief of gmundcars.com – a blog about Automotive. He has had over 10 years of experience in car repair and maintenance field. He has been writing articles to share his experiences and expertise. Some of his review articles about car parts and tools can be found on his website. Check him out on Facebook and Twitter.

Other articles you might like:
Evacuation Prepping for the Average Person
Catalytic Converter Thefts Skyrocketing–Why Thieves Want Them
Best Ways to Avoid a Car Accident in Atlanta
Semantics: 4WD is not AWD
How to Make Your Teen’s Driving Lesson More Engaging

Driving News Stories
An Australian Speed Trap Made the City Millions in a Couple of Months, but Drivers Finally Score a Win
Speed cameras in Youngstown, OH get green light
Tesla opens 'Full Self-Driving' beta testing to anyone in North America
Tesla safety at centre of South Korean trial over fiery, fatal crash
Chinese carmakers target European EV sales with five-star safety scores
Join the NMA!
The opinions expressed in posts to the NMA Blog belong to the author and do not necessarily represent those of the National Motorists Association. The content of the NMA Blog is for informational purposes only and is not intended as legal advice. No representations are made regarding the accuracy of NMA Blog posts or of links found within those posts.
NMA Guest Blog Guidelines
NMA Traffic Law Blog Guidelines

3 Responses to “HID vs. LED vs. Halogen Headlights: Which is Best for your Car?”