One of the most effective ways for a NMA member to go on the offensive is to issue a public records request. Governmental transparency is a wonderful concept but it remains just a concept unless the citizenry actively exercises the right to probe the policies and actions of public agencies.

There are many reasons to use federal and state public records laws to obtain government documents. Among them: 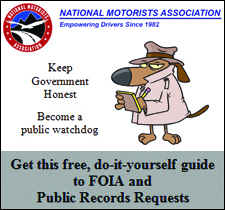 The power of this instrument of the people cannot be understated. Earlier this year the NMA issued an 11-page guide to public records requests to demystify the process so that more will be encouraged to examine and challenge the actions of government. This is particularly true when those actions involve motorist issues, where policies seem to be driven more by the need for revenue than for the safety of the greater public.

(Click the adjacent watchdog image to review the guide.)

Last month the opportunity arose for us to use our own guide. As outlined in E-Newsletter #303, Masking an Agenda, AAA Idaho publicly questioned the Idaho Transportation Department’s (ITD) plan to increase the posted speed limit on several segments of interstate from 75 to 80 mph. While AAA used public statements to delay action by the ITD, the NMA decided to use the power of actual information.

In #303, we noted that it took but 30 minutes to issue a public records request to the ITD, an action that within days provided proof of the due diligence performed by that agency before it made the decision to raise the interstate limits.

The brief, four-paragraph October 8, 2014 letter from Gary Biller to the chief administrative officer of the ITD is displayed below. A quick review of the NMA public records request guide, and in particular of Appendix 1—Public Records Request Examples, and Appendix 2—State Public Records Laws, made the letter a straightforward task.

Of course, not every information request can be summarized as simply. But with the NMA Guide to the Freedom of Information Act and State/Municipal Public Records Requests in hand, you’ll be able to effectively challenge governmental actions through discovery.

And remember, if there is a processing fee from the agency to respond to your information request the NMA has another resource at your disposal. Our Community Support Program can provide a grant to help cover such costs. As the NMA tagline says, “Empowering Drivers since 1982.”