NMA E-Newsletter #280: Can it really be Safer to Drive on the Wrong Side of the Road?

They’re rebuilding the main intersection here in Waunakee, transforming a traditional signalized intersection into a roundabout. Our office is about block away from the action, so we can hear them working, and much of the traffic is getting diverted onto our street for the duration of the project.

The roundabout is a relatively new fixture in this area, and drivers will need some time to get comfortable with it. All of which got us thinking about the prospects for other “alternative” traffic designs that are popping up around the country.

We’ve already discussed one up-and-coming interchange design known as the Diverging Diamond Interchange (DDI). In 2010 only one had been constructed in the United States in Springfield, Missouri. Since then, 17 have been completed, and 45 are in the works.

The key difference between a DDI and a conventional diamond interchange is that the opposing lanes of the feeder road cross each other twice at traffic signals, so that for a short distance, vehicles are driving on the opposite side of the road. (See the diagram below.)

With the Displaced Left configuration, traffic turning left shifts to the left approximately 300 feet from the intersection and then travels on the opposite side of the road before turning left. Traffic signals at the intersection control through traffic while left turning traffic proceeds simultaneously. (See the diagram below.) 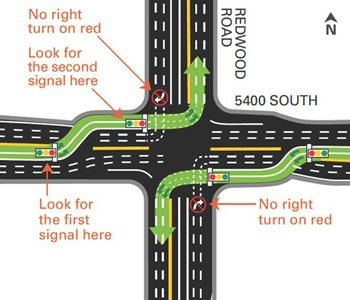 Again, the idea is to reduce the number of signal phases and conflict points with corresponding benefits in traffic flow and safety.

There are several variations on the U-Turn scheme. Let’s look at the Median U-Turn, also called a Michigan Left. Here, left-turning traffic proceeds through the main intersection to a U turn location downstream. (Follow the red arrow on the diagram below.) It then heads back toward the main intersection and turns right. This eliminates direct left turns and reduces conflict points. The green arrow shows a variation known as a Restricted Crossing U-Turn or RCUT.

Data from the FHWA and others suggest these nonconventional designs can reduce crashes by 50 percent or more. Supporters also contend they can be constructed more cheaply than traditional designs.

Traffic engineers seem to be paying attention. So far, 19 Displaced Left intersections have been constructed nationwide with nine more coming soon. For RCUT Intersections, 66 have been completed and 61 more are planned.

You’ve already given us ample feedback on roundabouts, so how about these new designs? Have you navigated any of them? How would you feel driving on the “wrong side” of the road? Are the initial driver discomfort and confusion worth the potential benefits? Let us know what you think.